The RUF Yellow Bird: The inside story on why it flies again 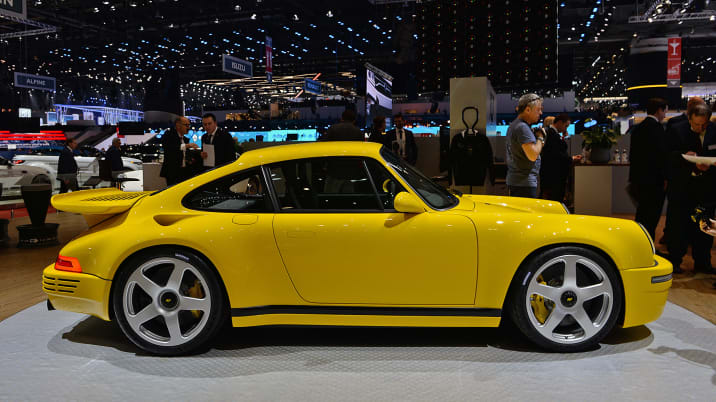 RUF surprised us a few days before the show opened its doors by announcing plans to propel one of its signature models – the 1987 CTR, also known as the RUF Yellow Bird – into the 21st century. Company boss Alois Ruf sat down with Autoblog to explain why the time is right to release a modern-day Yellow Bird, and why it’s already a smash hit.

The Geneva Motor Show is like a compilation album of greatest hits from the world’s most exclusive automakers, so it’s difficult for smaller companies to stand out and capture the attention of show-goers. Just ask Alpina, Rimac, or even Morgan. Storied German brand RUF is the exception to the rule this year.

Autoblog: What made you decide to bring the Yellow Bird back this year?

Alois Ruf: The most obvious reason was to celebrate the car’s 30th anniversary, but there’s more to it than that. The original Yellow Bird has become a highly sought-after collector’s item. Only 29 were made, and they regularly trade hands for over a million euros (about $1.05 million). The fan base is there.

AB: We know the new CTR rides on a new carbon-fiber chassis developed in-house. Does it share any components with the 1987 car?

AR: The rear-view mirror, I think. Everything else is new, including the entire suspension. The engine is a water-cooled, twin-turbocharged 3.6-liter flat-six that makes 710 horsepower at 6,750 rpm and 646 pound-feet of torque from 2,750 to 4,000 rpm. It’s bolted to a six-speed manual transmission.

AB: What is the 2017 car like to drive compared to its predecessor?

AB: Will it be sold in the United States?

AR: Yes, it will absolutely be street-legal in the United States. We are recognized as a manufacturer by government agencies in the US like the Environmental Protection Agency (EPA) and the Department of Transportation (DOT), so that allows us to export the cars over there. In fact, using a water-cooled engine was necessary to meet EPA regulations.

AB: Can you provide more details about pricing and availability?

AR: We’re building 30 cars. We chose that number because the model celebrates the original CTR’s 30th anniversary. I think 10 or 15 examples will go to the US; roughly half of the production run. In Europe, the car costs 750,000 euros (about $791,000) before taxes are factored in.

AB: How many of those 30 cars have been spoken for already?

AR: Actually, we’ve sold pretty much all of them. It’s amazing how things have developed since we unveiled the car. As soon as photos and information surfaced on the internet we received phone calls from enthusiasts as far as Sweden and Japan who placed an order without having seen the car in person. There’s a lot of trust and credibility behind this model, which makes us feel good.

AB: What do you attribute the success of the modern CTR to?

AR: I think it’s due to the very, very strong image of the original Yellow Bird. Don’t forget: we only built 29 cars, but over 20 million of them were distributed through video games. And now, the kids who used to race these cars in various games have become buyers.